Look at this beautiful Girl

Mathematicians throughout the world have wondered for a very long time if the prime numbers, numbers which can only be divided by themselves and one, know/show a certain pattern, structure or repetitive appearance/behavior ergo if there is order in the chaos. To answer this question, Riemann formulated the zeta function as an approximation. Many till date have tried to prove this zeta function. Because of the character of this function, its incompleteness is by definition as is the case with all approximations; cohesion of the primes will never be found using this function. Perfection does not know shades of grey or an approximation. Something is either perfect or it is not, it is either 100% complete or not.
In this article the perfect order in the distribution of primes over the natural numbers is proved using ‘Numeric Mathematics’ as KEY to remove the haze of chaos which covers the distribution of primes over the natural numbers. Numeric Mathematics functions as the key in identifying universal rhythms, cycles, patterns and mechanisms ergo order in any apparent chaos of numbers in which chaos is defined by the (in)ability of someone’s consciousness to recognize structure.
Firstly, the prime numbers are rewritten to their ‘Numeric Value’. As next step the primes are regrouped using solely their Numeric Value as ‘tag’. This provides us level 1. As next step the primes are regrouped again by their Numeric Value and their last digit, the second tag. Thus at level 2, 27 ‘Numeric Prime Families’ or ‘Prime Branches’ can be identified using the two tags. The amount of tags can be expanded by using the before last digit etcetera. This leads to the creation of more and more branches in the Tree of Primes.
It can now be observed that the distance between two consecutive numbers within the same branch of a Prime Family is Numerically always a 9. This 9 is the result of a real value of integer multiples of 9, 90, 900, 9000 and so on in which a zero is added for each next level of depth (a subset of the previous level) looked upon. The distance between any two number of primes within branches of a similar level is as well always a Numeric 9. This principle has been used in a prime generating algorithm for the second level of primes; an algorithm that can be extended easily to deeper levels. This algorithm starts by defining the ‘heads’ of the prime families. As second step it defines ‘potential primes’ by adding 90 to an existing prime. Using already known or ‘historic’ primes it then determines if the potential prime is a multiplication of earlier found primes. If this is not the case, a new prime number is found and added to the respective family. This algorithm has, using a simple laptop, calculated primes up to 5.337.929 in a relative short time frame. It as well clearly shows that the often excluded number 1 is definitely a prime number as this number is the first ‘prime family head’. Besides this algorithm, many samples of existing primes numbers have been recalculated and regrouped according to the principle mentioned above. All these samples show exactly similar and matching behavior. Therefore we can talk about One System within the ‘Tree of Primes’ of which all primes are part.

3.     Rewriting the primes to their Numeric Value 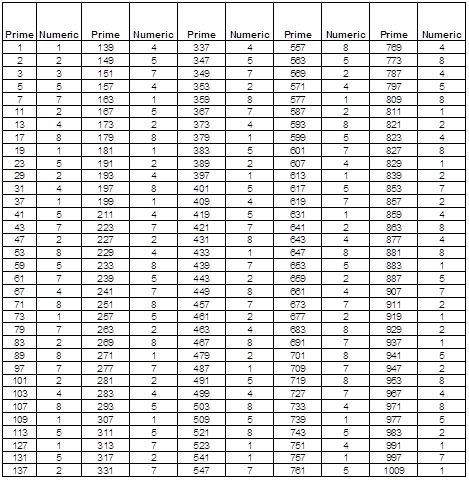 4.     Regrouping the primes by their Numeric Value

6.     Calculating the distance and the Numeric distance

The next step is to calculate the distance and Numeric distance between the consecutive primes of a subgroup of a Numeric prime family. The result can be found in the four lower tables of Table 5.2. The distance between the consecutive primes of a subgroup of a Numeric prime family is always 90 or integer multiples of 90. The Numeric Value is always exactly 9!
Steps of 90 and multiples of 90
In research it can be very useful to take a look at the ‘other’ side which in this case is filled with the numbers which do not occur within the 27 Prime Families. Observing through this perspective is done to find out what these numbers have in common. All the numbers which are not part of these families and therewith lead to distances between prime numbers of more than 1 times 90 are the result of multiplications of earlier found primes. No other numbers than previously found prime numbers within in the various Prime families are involved in calculating these ‘missing’ numbers. Therefore the ‘combined knowledge’ of previous primes is used to construct a ‘building principle’ which results in ‘organic growth’ based on previous growth results realized by the combined 27 Prime Families in which the word growth can be replaced by the word experience. 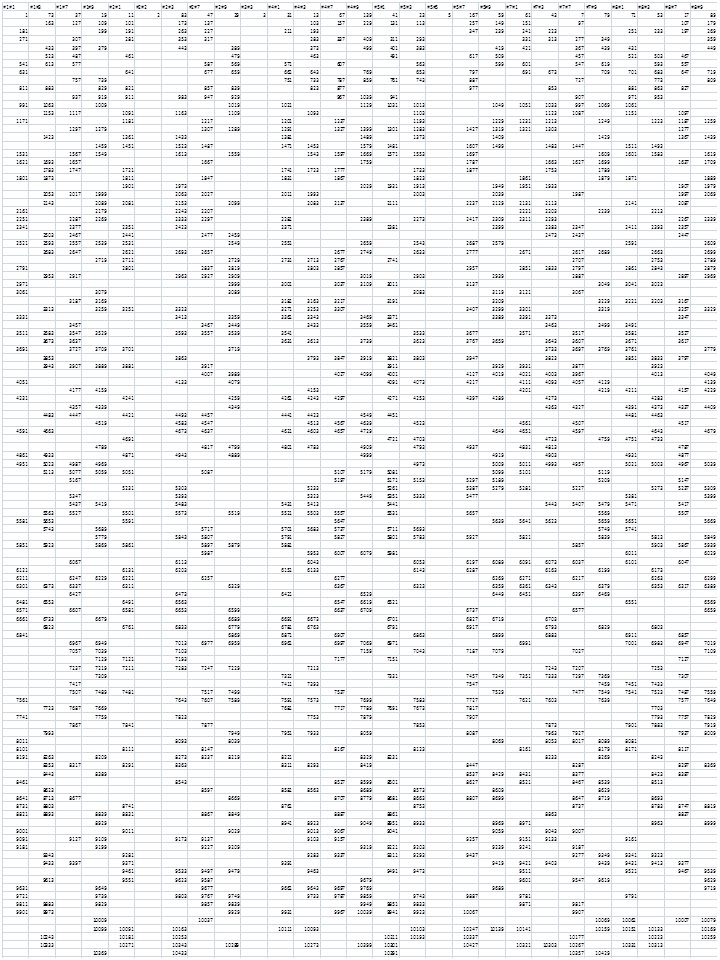 8.     Four examples in the higher ranges of prime numbers. 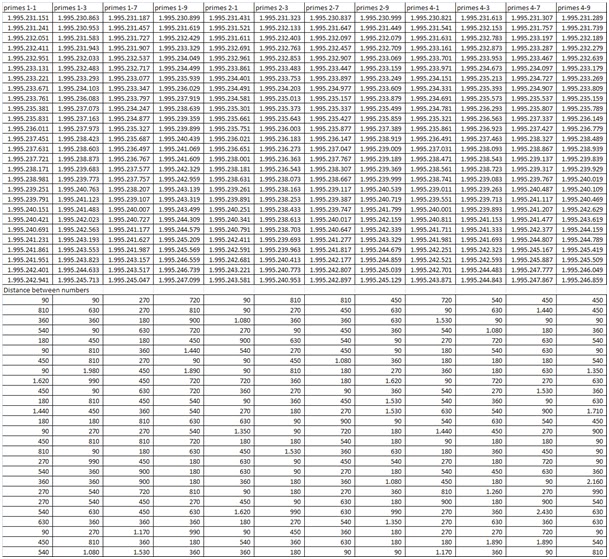 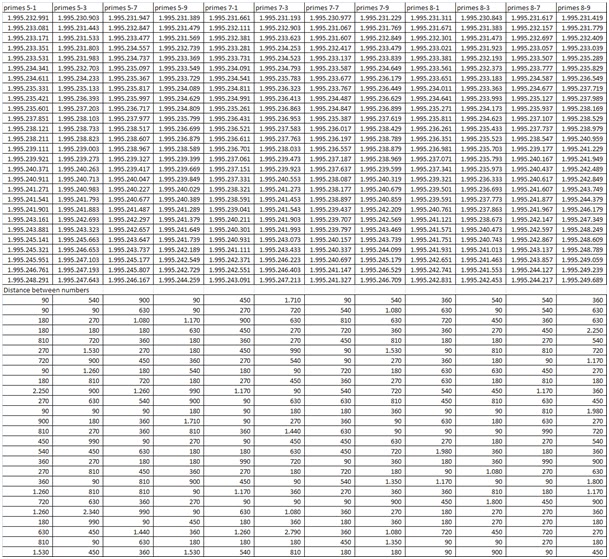 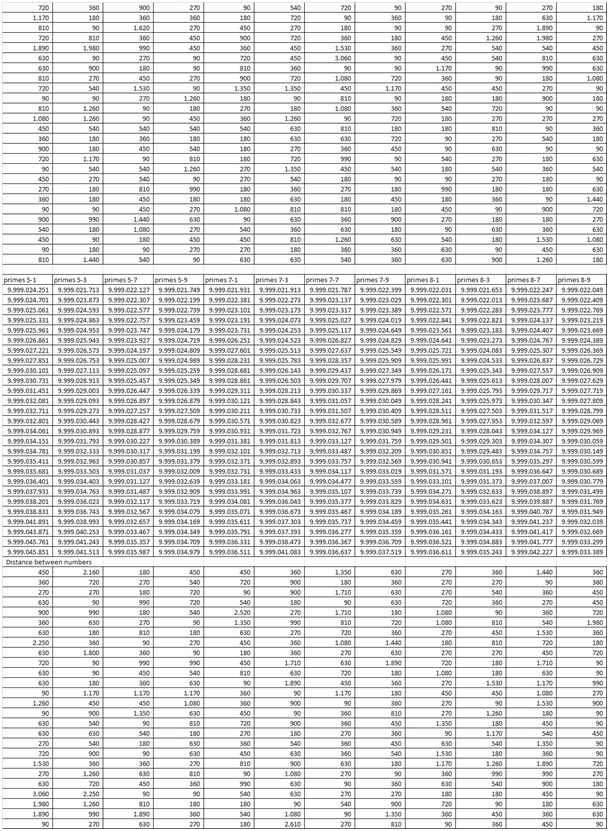 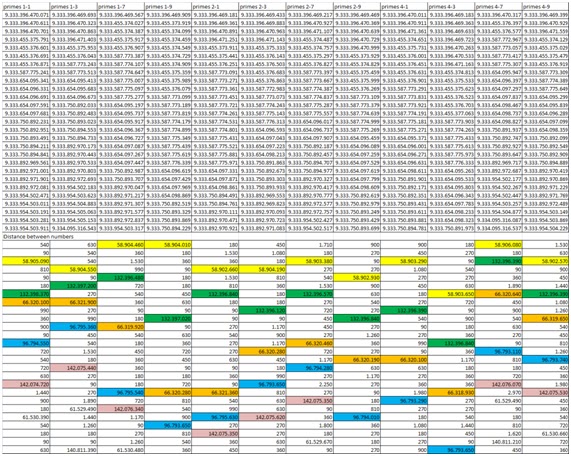 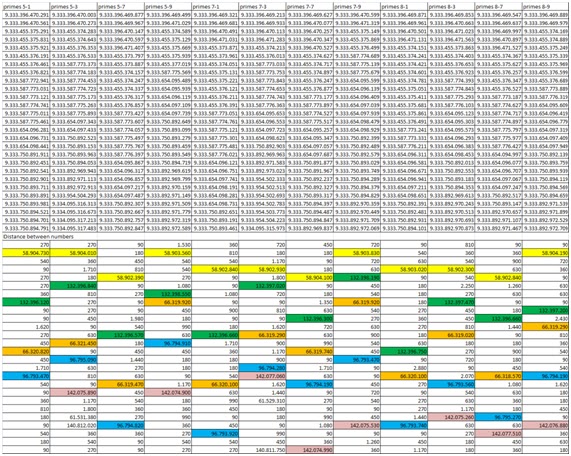 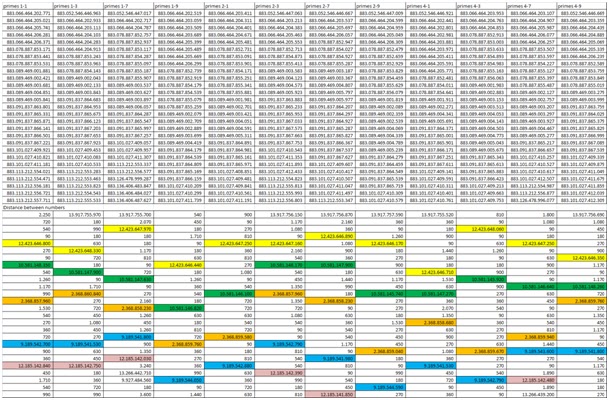 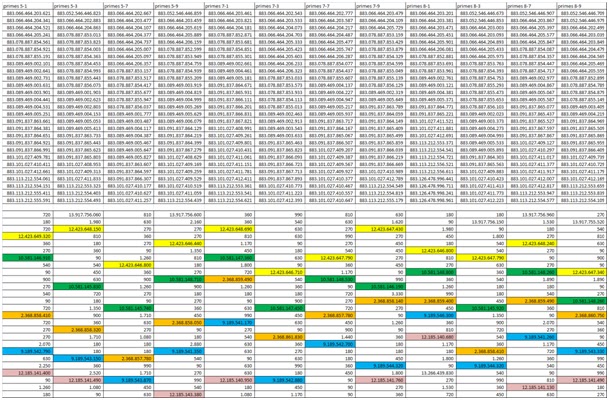 The million dollar question I would like to include for the readers of this paper is the following: why are primes called primes ergo what is the ‘Universal Binding Factor’ between All Primes? As a small clue: the answer should be looked for in ‘Energetic Causes’ and not in ‘Behavioral Effects’.
9. Example of sub branches of branch 2-3
Please find below as example a part of the subdivision of branch 2-3 as shown in paragraph 7. By including another ‘tag’, the penultimate digit we get to 2-6-3 and thereafter 2-7-6-3, 2-4-7-6-3 and
2-2-4-7-6-3 through adding more ‘tags’. As can be observed, the distance between two consecutive numbers is always an integer multiple of 900 at the 3rd level and a tenfold for each deeper level. Distances between any prime number at the same level is always a Numeric 9. This rule extends to distances between any prime within the same branch at the first level being 1, 2, 4, 5, 7 and 8. 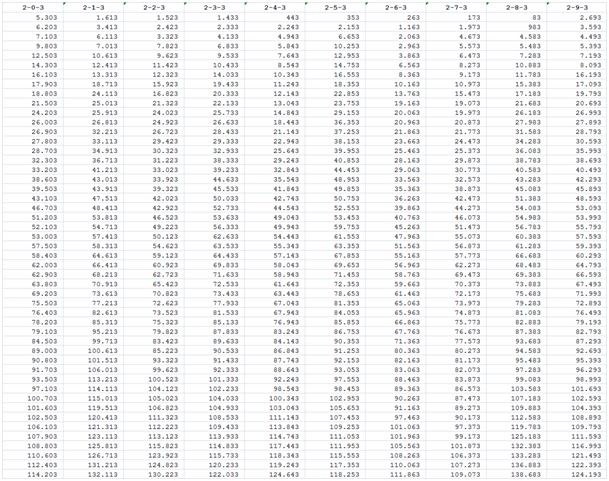 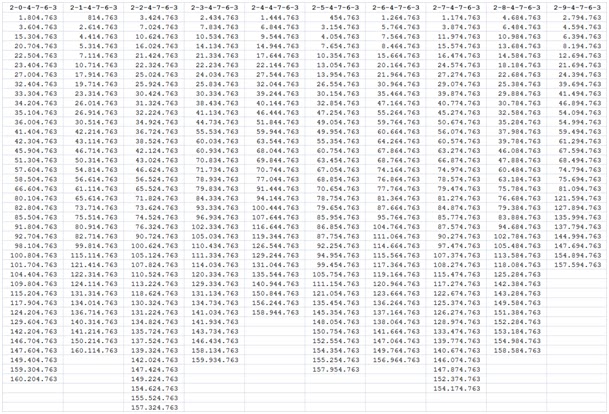 This sub branching process can be repeated until we find the individual unique primes, all beautiful leaves on the Tree of Primes.
10. Perfection in the Numeric distance values between primes in various branches
We have seen that between primes within the same branch the distance is always a Numeric 9. Could we find such an elegant structure when looking at distances between the various branches, for instance at level 1, the branches 1, 2, 3, 4, 5, 7 and 8? The answer is affirmative and shows additional evidence of this Universe being 9-based. Its perfection applies for both B<A and B>A in A-B = C in which the positive Numeric Value minus the negative Numeric Value always equals Numeric 9. The result can be plotted in the below 6x6 ‘Magic Square’ filled with one positive and one negative Numeric Value per cell. At this point I would like to refer to the Nine Pointed Star, the Ennead, the Nine that are One which is one of the most ancient symbols in this World. It is constructed of the triangles 147, 258 and 369 in which the order of the digits depends on the position of the observer. See for yourself why this Fruits of the Spirit was chosen as their Symbol by the Freemasons; an organization carrying as its motto ‘Ordo ab Chao’. Feel free to contact me at gert_kramer@monkeyminds.eu if you wish to receive the supporting excel files. 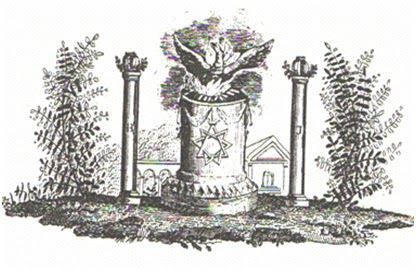 Let there be Light over One United World and Love in the Hearts of All
11. Philosophical view on the primes
If we would look at this prime structure from a philosophical perspective, is there anything that we can learn from it besides the fact that there does not seem to be Chaos in anything once the underlying patterns and structures are understood and visualized?
Let’s compare the growth and the requirements for growth with how we nowadays behave as human beings, each unique yet all humans, in for instance our economical behavior. In the algorithm one family cannot grow without the other families as it requires the help of the other families, help which is given by sharing the so-called ‘status’ within a family with other families. This allows each family to do the necessary checks on a potential prime number in order to identify if it should be included. If one family wants to grow too fast, in which too fast means not being willing to wait for other families input to verify a next number, this results in possible numbers entering the ‘system’ which would not have been part of this ‘system’ when a decent check would have been done. One wrong number included can eventually lead to the collapse of the entire structure of Families. As this counts for All the Prime Families, it can be considered a Universal Principle.
Quite often the statement ‘your growth is my growth as you are part of me’ is heard from persons who talk about Oneness. Well, this statement can be taken one step further. If you don’t grow I can’t grow myself in a solid way as without your help I cannot perform the necessary checks on the next potential Prime in line to become part of my Family. It therefore is sometimes necessary to wait for your turn until the other families are ready with their checks, a turn which is defined by the value of the next number.
The Family with the lowest potential number is the first one to do its check. Could this mean that Families who are already further ahead need to do whatever in their reach to support this Family? Shall we compare this with our global money system which has been created over the last centuries? This is a system which, by using interest rates and inflation, allows those with money to attract more and more money while those who have to borrow can always be kept short and even mistreated. Or shall we look at the unnecessary resources used when too many factories are constructed to create too many goods the majority of which we frankly speaking don’t need at all? How many shirts and jeans, cars or toys does someone need to be happy and realize his/hers dreams?
12. The Lost Key of Numeric Mathematics
Numeric Mathematics is Mankind’s ‘Lost Key’ talked about in the Hermetic Philosophy. This Key allows a door to be opened behind which another reality can be found. In this time the Key is recovered and shared again to help Mankind reach Its next level of Cosmic Consciousness.
I hope that this mathematical example of the cooperation of Prime Families to create a stable growth for All Families and the perfection within this system will lead to new insights, a re-evaluation of and a fundamental change in the way we as Mankind currently deal with each other and All that surrounds us of which we are part.
I hope this example will help to understand the ‘System of Oneness’ in which we take care for each other, the wealthy for the poor, the very conscious ones for their younger brothers and sisters. Then we as Mankind will evolve together applying the Universal ‘And’ Principles of Oneness of All, Balance and Harmony rather than the current Dualistic ‘Versus’ Principles in which many grow at the expense of another part of the ‘All that is One’. We, unique individuals, are All part of the One Tree of Life as all primes are part of the Tree of Primes!
Gert Kramer
Doorn,
The Netherlands
January 2012
“If an Angel were to tell us about his Philosophy...
Many of his statements might well sound like 2x2 = 13”
Georg Christophe Lichtenberg, Aphorism

I AM Gert Kramer
Which me? My Ego with my name connected to It? My Number or Energy Shape? My Nameless Soul? Or the I AM THAT I AM of which I AM part?